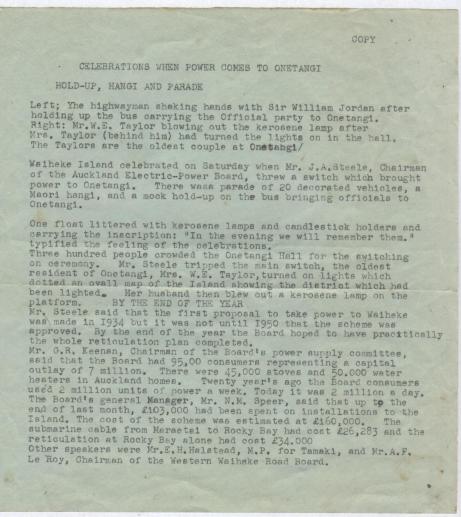 Kero was the word before electricity arrived on Waiheke Island. That was the power driving the enjoyment of the Islanders. Kerosene was used for lighting and cooking and there was always a 4 gallon tin of the stuff in the house or bach.

When we went down to the bach on the weekend we would often arrive in the dark so the first thing we did was to light the lamps. The most basic lamp had a small glass base, a wide wick and a glass chimney. Glass was different stuff in those days not the toughened ceramic whatever of today and so once the wick was lit the glass chimney was placed back in its holder and the wick turned down so as to warm the glass up before turning it up for more light. And what a dim little spectacle it was. The lamp had a tin reflector behind the chimney to reflect its meagre rays but because of the salty sea air it was nicely rusted and not much use reflecting any comforting light.

Now, onto the more powerful source of light, which was an Aladdin lamp. Once again the base which was the reservoir was on a nicely sculptured stand and the chimney was a very narrow elegant glass one, not like the previous lamp which had a fat squat glass chimney. Inside the chimney of the Aladdin was a “mantle” which seemed always to be broken! When new the mantle came in a little box and was very sturdy. It appeared to be made of cotton netting and it stood about two inches high. It was round about the circumference of a half a crown. (Yes, these are all old measurements but we are talking ‘olden days’ here, so the scale of things don’t stand converting to metric). It seemed to be coated in a blue tack. The mantle fitted onto the lamp and a match was applied and with a flare the mantle seemed to burn off the glue that made it so strong and it was ready. Once again, the wick was lit and turned down until the glass chimney warmed up. The mantle then started to glow white hot and lovely light came into brighten our lives. Now why it would glow, I dunno. It must have been a sort of pipe clay but for sure any sudden knocks or shifting the lamp could easily shatter this beacon. The remains of this miracle would still glow and give off light but not as much, of course. Once it got going you could light a cigarette over the top of the chimney it was that hot.

Now for a cuppa. The Valour stove was the next wick to be lit. They usually came with three chimneys. The wicks were often trimmed to give a heat source as good as the gas stove back home. Ours had an oven which could be removed if required and there were many roasts cooked on this stove to feed the starving troops milling around the cookhouse door. Very efficient, it all was, and we had an added benefit, warmth. Our bach was only two small ex-army huts put together so it quickly became a very cosy and well-aired home.

And then came electricity!!!